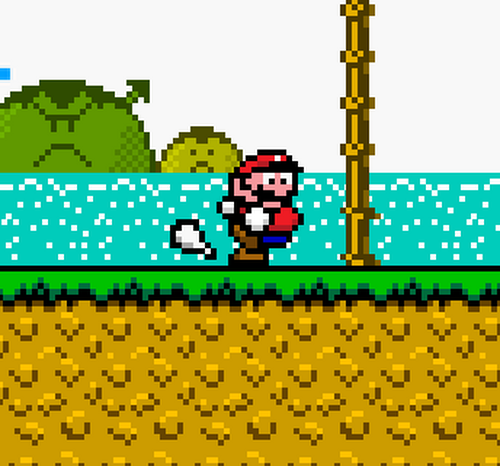 This update is mainly full of major quality of life tweaks, improving polish on the game and bringing it closer to the original Game Boy release:

+ Mario's movement has been completely redone, and now has inertia rather than just instantly snapping to a direction with full speed. I went back and forth on how "heavy" to make this and am completely open to feedback, as currently I'm not sure if it feels quite right

+ As a result of the inertial changes, sliding with a duck now finally works. Because this is now working as intended, I removed the sliding glitch that let you duck and move at full speed simultaneously, which while fun doesn't really blend well with an actual, functional slide

+ The game now has a fully working checkpoint, which will spawn you back at the bell in the middle of the level if you touch it prior to dying

+ The water in the background now has two extra layers of parallax scrolling, which gives the illusion of much more depth

+ Mario's hitboxes have been generally adjusted to be more consistent, and the issue where you could kill an enemy and die at the same time has been fixed

+ Added a jump buffer, or "coyote time," in order to make platforming a bit more forgiving. Whenever you walk off a platform you now have five extra frames to initiate a jump

Next patch will bring some physics tweaks based on feedback from this one, as well as the long-awaited addition of powerups. We're inching ever closer to the finish line for having a fully functional first level, and I couldn't be more excited. Thanks again to everyone for supporting the project, it's been incredibly motivating seeing people still checking out the game every day. See ya'll next patch!

Coyote Time is a great name for that feature