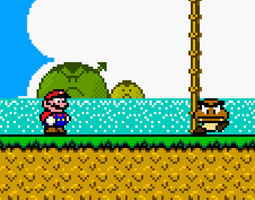 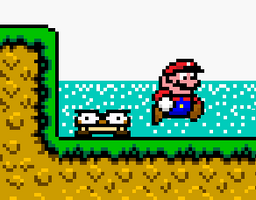 After a bit of a hiatus SML2HD is back with a brand new update! The game now has fully functioning goombas, player death, as well as some minor physics changes:

+ Added goombas, which can be killed with a stomp but will kill you if you touch them anywhere else

+ Added player death, which will restart the level. There's no lives or checkpoints currently but the latter should be on its way soon.

+ The issue where the player would continually jump if the jump button was held down has been fixed, which in the original game was only possible with the carrot powerup. Unlike the original however, a jump can still be buffered by releasing and holding down the button again in midair. I'm undecided whether I'm going to keep the game this way going forward as I like that the player has the option to buffer a jump to make sure it comes out on the very first frame possible, but this does diminish the utility of the eventual carrot powerup slightly

I couldn't be happier to be back working on the game again, and there should be more updates on the way very soon, I just wanted to get something out ASAP to make sure you guys knew this was still in active development. I've been blown away at the amount of support this project has gotten, we're now over 250 downloads! The fact that this many people have played my game is crazy to me, and has been a huge motivator in continuing development. So with that said thanks so much for checking out the project, and I hope you'll look forward to more updates in the near future.