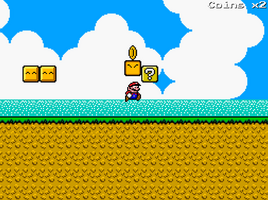 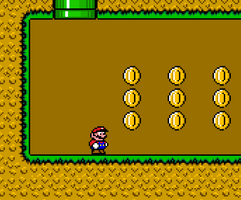 This update is pretty straightforward, adding fully animated coins and coin blocks into the game:

+ Added coins, with a unique spinning animation not found in the original game and inspired by Super Mario World

+ Added coin blocks, with an extended animation compared to the original game showing the coin going back into the block

+ Player can now interact with regular blocks, which animate and play a sound effect. They currently can't be broken since Super Mario hasn't been added to the game yet

We're getting really close to this being a complete project, and I couldn't be happier with the progress. As I mentioned in my last update, I do still plan to take a hiatus from the project once the first level is done, however at the rate its progressing I may end up working a little beyond that before moving on to my next game. Next update will be enemies, death, and checkpoints, then following that I'll finally be adding powerups. After that it's basically just polish, but we're getting ahead of ourselves, see ya'll next update!